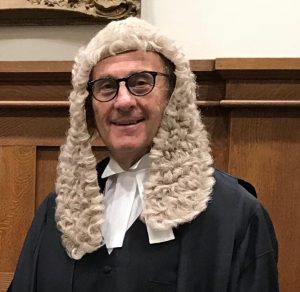 “This was my first socially distanced trial and it came after two other trials conducted by other judges. We have two more trials being conducted this week and we hope to progress to running three trials at a time very soon.

“My principle concern was whether we would get sufficient jurors willing to buy into, and accept the efforts which we had put in place to keep them safe. In the event all the jurors in my trial (and, I believe the earlier two trials) were brilliant.”

Her Majesty’s Courts and Tribunals Service (HMCTS) have worked closely with judicial office holders, organising thorough health and safety assessments to ensure the safety of everyone in all courts. At Maidstone Crown Court, staff led by the Court Delivery Manager have ensured that social distancing guidelines have been followed, including setting up appropriate signage around the court building, implementing rigorous new cleaning regimes, rearranging furniture and trialling the technology being used to assist the hearings. Judge Griffith-Jones explains:

“My Court Delivery Manager and all his staff had been brilliant in their efforts to ensure everyone’s safety. We had had a dry run of the revised procedures in advance with the parties and it helped immensely that both counsel involved were enthusiastically supportive of the whole process. The prosecution delivered all the bundles and other documents to the court three days in advance so that they could be sanitised and distributed to each jury position (together with pen, paper, clipboard and so on) to ensure appropriate quarantining in good time for the start of the trial. On the day of the trial, court staff directed the jury initially from Jury Reception down to their secondary court and then, as the selection process took place, into and out of the trial court as necessary. They managed everything seamlessly”.

Being a member of a jury can be an anxious time for some people; however, jury trials are a vital part of the criminal justice system, so extensive work has been done to ensure jurors feel safe in court during coronavirus. Judge Griffith-Jones explained to the jurors prior to selection the measures that had been put in place by the court. These included:

Overall, the experience of presiding over a socially distant trial was a positive experience for those involved. HHJ Griffith-Jones concludes:

“At the outset, I used a prepared script to address the jury panel by video link from the trial court to the secondary court.

“We experienced a few problems with the video link in terms of sound interference which we overcame by talking slowly and leaving gaps between sentences. As for the trial itself, the very first stage (getting the jury selected, into court and sworn) was painstaking and everyone was understandably nervous. But thereafter, as we got underway, everyone relaxed and the proceedings flowed pretty much as normal, save for the process of getting the jury in and out of court which took a bit longer than usual. It has to be said that the jury were brilliant and entered into the process with enthusiasm and never complained. From the feedback received from them subsequently, they appear to have found the experience both satisfactory and fulfilling.”