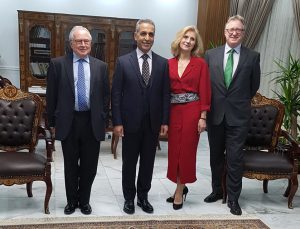 A delegation of English judges visited Iraq from 21 to 24 January for discussions on the rule of law, judicial independence and bilateral judicial cooperation. The delegation included Lord Justice Gross, Lady Justice Rafferty and His Honour Judge Andrew Hatton, Director of Training for Courts and Joint Dean of the Faculty of the Judicial College. The visit is the highest-level judicial visit to Iraq since 2003.

The delegation met senior Iraqi judicial and legal representatives including Chief Justice Zidan, President of the Bar Association Allami and members of the Higher Judicial Council. The judges were also guests of honour at a ceremony to mark the first ever Day of the Iraqi Judiciary.

In their meetings, the judges highlighted the importance of the rule of law and judicial independence as cornerstones in efforts to protect personal liberty, fight terrorism, tackle corruption, and attract investment.

The judges, who were accompanied by officials from the British Embassy including Ambassador Jon Wilks, also discussed steps to deepen UK-Iraq bilateral judicial cooperation, including work to strengthen Iraq’s judicial capacity.

“An independent Judiciary is essential to ensuring that laws made by the legislature are applied and enforced and that the executive branch of the government carries out its functions in accordance with law. We look forward to building relationships with the Iraqi Judiciary, committed as it is to building a society based on the rule of law.”

The visit follows Chief Justice Zidan’s official visit to London last October where he met UK government and judicial representatives and attended the Opening of the Legal Year, at the invitation of the Lord Chief Justice.