His Honour Judge Guy Kearl QC shares how he and colleagues at Leeds Crown Court have worked to ensure jury trials can resume safely. 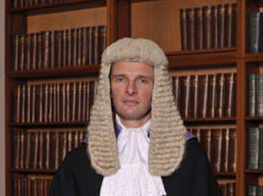 During the summer, His Honour Judge Kearl QC was chair of a small working group tasked with looking at the use of buildings outside the current court estate to  alleviate the pressure on courts and tribunals due to the Coronavirus pandemic; these are now known as Nightingale Courts (external link, opens in a new tab). The group worked with architects at the University of Lincoln School of Architecture to produce a report on how alternative buildings could be used as courts, which they presented to the Lord Chief Justice in May 2020. While working on the report, HHJ Kearl was also thinking about how this solution could work in his court room at Leeds Crown Court (LCC). HHJ Kearl says:

“I measured the larger courtrooms at LCC to see whether it might be possible to configure the courtroom in such a way as to fit a jury of 12 people, the defendant, witnesses, court staff, advocates and the Judge. After several attempts by both myself and HMCTS we concluded that it was not possible. Since there were no proposals of alternative ways of holding jury trials at Leeds Crown Court, I invited quotes from independent design consultants to look at the courtroom layout and see whether they could design an acrylic booth to allow the court to remain largely as it is in terms of layout. The jurors would sit inside booths, thereby creating a physical barrier between them. I made it clear that I was looking for a solution which could then be scaled up to use in several courts at LCC and elsewhere. It was agreed that the use of moveable acrylic screens was preferable to static booths. 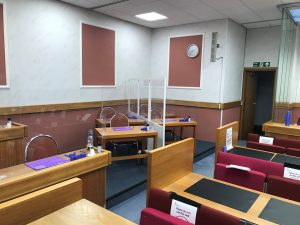 A sample set of screens was manufactured and delivered to LCC on 7 July 2020. The design required some adjustments before I would accept it, such as making the jury box less claustrophobic, changing the layout to allow jurors to see everything in the courtroom, fitting a front screen to each row for the protection of jurors and counsel together with T-sections on the return to the side screens and a plinth to ensure that the judge could see all of the jurors.

I conducted the first trial on 15 July 2020. In advance of that date I listed several cases for a Future Trial Review (FTR) process, a system designed by HHJ Richardson QC, the Recorder of Sheffield, to ensure that appropriate cases were identified which could be tried, ensuring there were no avoidable surprises on the morning of the trial.

In the meantime, together with the court staff at LCC I identified one room which was of sufficient size to allow 12 jurors to deliberate with two-metre social distancing gaps between them. Each member of the jury panel in waiting was allocated a specific number when they arrived at the building so they could easily identify their seat in the jury assembly area, the courtroom and the jury deliberating room. Ushers were briefed upon the requirement to ensure social distancing both in the assembly area and on the way to the courtroom. Two ushers were allocated to chaperone the jurors.

I had several concerns about resuming jury trials, each of which surrounded the safety of all participants. To alleviate this, together with my local HMCTS team I walked through every step of the routes that the jurors, advocates and witnesses would take before agreeing to resume trials.

The jury were selected remotely and then the chosen 12 were brought into court. They sat patiently and listened to the evidence. The trial lasted for two days and pretty much everything went smoothly. I had dealt with any points of law in advance of the trial and agreed the points to be covered during the summing up with counsel. Apart from a hiccup over the printing of some Agreed Facts for the defence team there were no delays. Counsel were diligent in providing their estimates of time that the witnesses would take when giving their evidence and in their final speeches.

By the end of the trial, the jury could get into court and to leave court in just under two minutes meaning that there was almost no delay to the trial process. Furthermore, by utilising this design the jurors could all see and assess the witnesses and defendant throughout the trial and only one courtroom was needed. 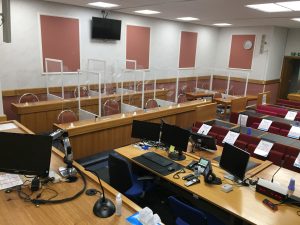 A court room at Leeds Crown Court with acrylic screens

Since July we have held trials at LCC continuously. Jurors continue to be asked about their experience and the overwhelming majority report positively. We are now scaling up the number of trials we conduct. Since the first trial, each has been presided over by a different judge at LCC in order to give all the experience whilst the pressure of running numerous trials is at its least.

The LCC model is now being rolled out across the jurisdiction to many court centres that do not have courtrooms large enough to hold jury trials. It is a very simple and inexpensive idea but provides a safe environment in which the jurors can concentrate upon the case rather than be concerned about their own welfare. Our delivery managers have worked tirelessly to ensure the systems for the movement of everyone in court operates seamlessly.

Although the process involved in getting the courts fitted out has at times been very frustrating, the end product has allowed us to recommence trials in a safe environment, something which we could otherwise not have done. We are all looking forward, albeit with some apprehension, to scaling up the process which will allow us to at least address the increase of the backlog of jury trials. It has been good for both the morale of the judges and the court staff who have worked together positively to make the trial process work.”