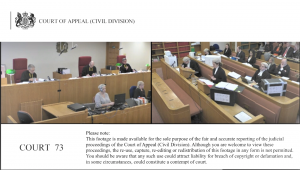 The first Court of Appeal (Civil Division) hearing to be live-streamed in full will start on Thursday 15 November as a public pilot for a new service designed to increase public access to the work of the court.

In the case selected for the public pilot, West Ham United and E20 which manages the former Olympic stadium are in dispute as to the seating capacity that should be made available to the football club  for its home fixtures at what is now known as the London stadium in Stratford, East London.

The live streaming will be available through the judiciary website (opens in a new tab).

Sir Terence Etherton, the Master of the Rolls, said: “This is an exciting way of opening up our courts to help the public understand and see for themselves the way that courts work, and how appeals are heard. The first case is a high profile one with a great deal of public interest, which is why it has been selected for the public pilot.

“The intention is to have up to three appeal hearings being live-streamed in the near future, assuming that all works well with the public pilot. We hope that as well as opening up the court’s work to a mass audience, the broadcasts will increase public confidence in the system.”

Under this system, cases are selected for live-stream by the court itself. The image broadcast will be of a split screen, with simultaneous broadcast of the judicial bench and the front rows of counsel in the case.

Following a period of test filming, this will be the first ‘live’ broadcast for an external audience. The proceedings are subject to a short delay, as per the Supreme Court’s system, which allows for a case to be halted to ensure that (for example) an inadvertent breach of a reporting restriction would not be broadcast.

The public pilot will be subject to an evaluation before live-streaming is extended. If the pilot is successful, the Master of the Rolls will seek an amendment of the existing Statutory Instrument to enable family appeals to be live-streamed, a move supported by senior family judges.

Virtually all courts and tribunals in England and Wales are open to the public and Press.

The live streaming will be available through the judiciary website (opens in a new tab).

More about the Court of Appeal (opens in a new tab)