His Honour Judge Anthony Potter shares his experience of presiding over a socially distanced trial at Warwick Crown Court.

On March 23 I stopped conducting jury trials on the instruction of the Lord Chief Justice to all Crown Court judges, and prior to swearing a jury on 26 May, I had not presided over a trial in the intervening period. Instead, I had grown familiar with conducting virtual hearings. The experience of having to master a new way of doing things was invaluable when it came to consider how the traditional trial process could be adapted. 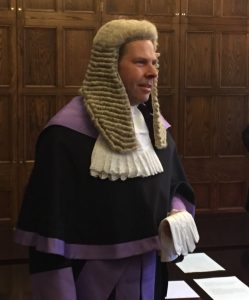 We were greatly assisted by the fact that Warwick Crown Court sits in a large modern building, and of our four court rooms two are particularly large and have no fixed seating.

In the early stages I think the biggest concern was if we could hold a trial, we might still find ourselves without sufficient jurors, but those summonsed were reassured by the steps we had taken to ensure their safety.

It is no exaggeration that the trial that I presided over was only successfully completed due to the preparatory work performed by our Court staff and the Resident Judge.

Staff and judges re-arranged the layout of Court 2, as the hearing court, and Court 1 as the retiring room. Painstaking efforts were made to ensure that every juror was always two metres apart from any other person. The advocates and jurors swapped their usual places, and the jury took over almost half the court room.

The staff devised a system whereby each panel member was brought into court and directed to a spot marked on the floor. If they were selected they were told to remain on that spot, and not to step into the jury box at that stage, but rather take the affirmation reading the words from a television screen.

The jurors, once selected, were each given a jury pack with a number to wear and that identified the seat on the jury that they would occupy in court, in the retiring room and the jury suite.

Their initial entry into the building was carefully staged with clear markings and time slots for individuals to answer the summons to avoid a lengthy queue. The jury officer had a Perspex screen to ensure she was protected.

Everyone was provided with a pack containing hand sanitiser, and water, masks and gloves were made available. When moving up to court the lift was only made available to those with mobility issues.

We took time to identify a suitable trial, recognising that something serious but relatively straightforward with a small number of witnesses would be ideal. We settled upon an assault case which had a three-day time estimate, and only two eye witnesses had been fully bound to attend at trial.

It is easy to forget that what is familiar to us, as our usual work environment, is always a foreign world to those on the jury panel, many of whom will have been nervous simply about answering the summons and what might be expected of them. To that extent asking them to behave differently from the way that we would ordinarily expect is no different as far as they are concerned.

When I first addressed the jurors I simply referenced what they had already been told and made it plain that they should draw any concerns they had to my attention because it was important that their attentions were focussed on the evidence.

When it came to the advocates and other legal representatives we recognised that if we were to start a trial it was important that the parties were given reasonable notice and felt invested in the process.

This meant writing to each advocate to warn them that their trial was being considered for listing, arranging a second pre-trial review in the week prior to ensure that it was trial ready, and based on advice, that any bundles of documentation for the jury were at court 72 hours before the trial started.

Advocates were invited to inspect the court, receive a presentation from the Resident Judge about the special arrangements that had been made, and to conduct a walk through; ensuring they were familiar with the process prior to the start of the trial.

I have no doubt that all our preparations reassured everyone involved that they were participating in a proper judicial process and not a ‘social experiment’. Yes, everything took longer when we started, but it ensured everyone could concentrate on their individual roles without fretting about the adequacy of the safety measures.

We had agreed in advance that if an insuperable difficulty reared its head then, notwithstanding all the work that had been put in, the trial would simply have to be stopped.

As it was, from the start the jury appeared engaged. When minor problems arose, such as feedback issues with the microphones specially installed for the advocates, I worked quickly with the court staff to resolve them.

I was pleased to hear from counsel in an exchange after the second day, that “…we are both are amazed at how smoothly the last two days have gone, and we, as practitioners, appreciate the hard work and indeed rehearsals that have been conducted to make sure the trial process is viable”. It was also satisfying when the following day the jury retired and late in the afternoon reached a verdict.

As others who have conducted socially distanced trials have observed, there is certainly no ‘one size fits all’ approach to be adopted, but we found that with some thought, a little hard work and a dash of enthusiasm, it was at least possible to conclude a trial under the current COVID-19 restrictions.

Please note that individual courts may have different measures based on their capacity to ensure the safety of everyone in court.