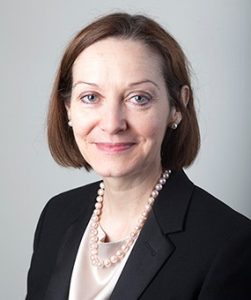 Mrs Justice Finola O’Farrell DBE (opens in a new link) today (Monday 2 March) takes over as the new Judge in Charge of the Technology and Construction Court (TCC).

She takes over the position from The Hon Mr Justice Fraser (opens in a new tab), who had been the Judge in Charge of the TCC since 1 February 2018.

Mrs Justice O’Farrell said: “It is with great pleasure that I take on this new position.

“I am eager to work with the TCC judges, staff and users’ groups, in the Business and Property Courts throughout England and Wales, to maintain and improve the high standards, diversity and innovation for which the TCC is known.”

She was called to the Bar in 1983 by Inner Temple and took Silk in 2002. She was appointed as a Recorder in 2007 and made a Justice of the High Court (Queen’s Bench Division) in 2016, assigned to the TCC, part of the Business and Property Courts.

Prior to her judicial appointment, Mrs Justice O’Farrell DBE had over 30 years experience as a leading barrister in construction, engineering, energy, shipbuilding and information technology cases. She acted regularly as counsel or arbitrator in international arbitrations and is an accredited adjudicator and mediator.