26 primary schools across Suffolk took part in the competition and it was narrowed down to Palgrave Primary School and St Mark’s Catholic Primary School. 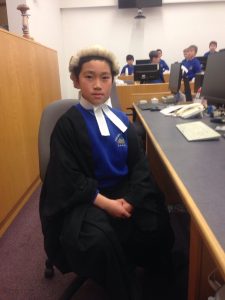 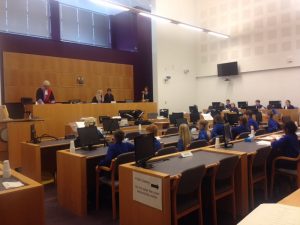 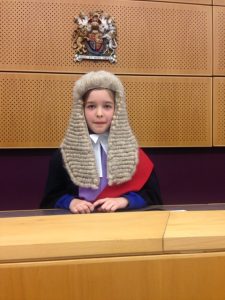 The competition was the brainchild of His Honour Judge Rupert Overbury based at Ipswich Crown Court who also wrote the script for the trial.

The trial describes the plight of Johnny Rotten who was accused of stealing a blue and white bicycle from a garden shed – his fingerprints were on the handlebars, and his footprints were found in the mud on the path outside the shed.

The children were sent a script a month before the trial so they could learn it in advance and act it out in the courtroom. However, there was plenty of scope for improvisation on the day.

The mock trial was intended to be highly interactive and creative, improving the confidence for all involved. The children also practiced projecting their voices as the microphones were turned off which the High Sheriff found out to his cost when he was given a telling off by the young judge for “an interruption in the public gallery”.

The two sets of finalists set a very high standard, with both schools making great efforts and delivering impressive performances. The 10 and 11 year olds performed with great enthusiasm and obvious understanding of the proceedings.

Watching the proceedings from the public gallery were the High Sheriff George Vestey DL, the Mayor of Ipswich Jane Riley and her consort Adam Rae, Jordan Holder from the Careers and Enterprise Company (also a school governor at just 22), and Susan Acland-Hood, the Chief Executive of HMCTS.

Assisting the Mayor and High Sherriff on the judging panel were two school children, Hannah and Henry. It was a hard task for the judges to decide on the winner; the judging criteria included performance and imagination, but the first prize was awarded to St Mark’s Catholic Primary School.

They were presented with a unique trophy that had been carved from solid ash by Judge Overbury. Other prizes included book tokens and tickets to see Ipswich FC play against Birmingham.

St Marks head teacher, Claire Jackson said: “The whole experience has been a fantastic opportunity for learning new life skills and enhancing understanding of the judicial system. The children could never have learned this in a class room.”

Nine months ago, the Lord Chief Justice launched his schools’ initiative, urging schools to invite judges into their classrooms so that children could learn more about the justice system.