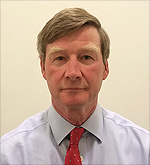 Mr Justice Popplewell grew up in rural Buckinghamshire before attending Radley College. He was called to the Bar in 1981 and from 1982 – 2011 specialised in commercial law, including shipping, insurance and reinsurance, banking and finance, international trade, energy, civil fraud, financial services, arbitration, and professional negligence, together with some professional disciplinary, Consumer Credit Act, employment, defamation and public law work.

He was made a Queen’s Counsel in 1997 and a High Court Judge of the Queen’s Bench Division, authorised to sit in the Commercial Court and Administrative Court in 2011. As Chairman of the Security Committee of the Judge’s Council Mr Justice Popplewell oversaw the introduction of minimum safety standards in all court and tribunal hearing rooms at all levels across the country. He was Judge in Charge of the Commercial Court in 2017 – 2018 as well as chairing a working group looking at the use of witness statements in the Business and Property Courts.

Mr Justice Popplewell is a trustee of the London Library and enjoys fishing, particularly in remote locations in England and Alaska. He has three children who have all appeared on-screen in film productions. 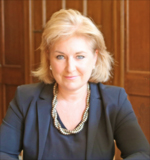 Mrs Justice Carr grew up in Surrey, attending Wycombe Abbey School, Buckinghamshire, before reading law. She was called to the Bar in 1987 and then practised as a barrister, specialising in general commercial law with an emphasis on professional liability and insurance. She was appointed Queen’s Counsel in 2003. She became chair of the Professional Negligence Bar Association in 2007, chair of the Bar Standards Board Conduct Committee in 2008 and was appointed Complaints Commissioner to the International Criminal Court in the Hague in 2011 before becoming head of chambers at Four New Square.

Appointed to the High Court Bench, Queen’s Bench Division in June 2013, Mrs Justice Carr became a nominated Judge of the Commercial Court and the Technology and Construction Court in 2014. She was a member of the Investigatory Powers Tribunal from 2014 to 2016 when she was appointed a Presider of the Midland Circuit.

Mrs Justice Carr is married and has three children. She is fluent in French and German. She was formerly a keen actress with the Bar Theatrical Society and now sings with the Bar Choral Society which she enjoys alongside her hobbies of walking, tennis and skiing. 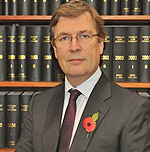 Mr Justice Phillips grew up in Chester as the son of two Welsh parents from Llanelli in Carmarthenshire. He attended a state primary school before being awarded a free place at the King’s School, Chester.

After training as a barrister he was called to the Bar in 1984 where he specialised in banking and financial law. He was appointed a Queen’s Counsel in 2002 and then Master of the Bench at Gray’s Inn in 2006. He was made a Justice of the High Court within the Queen’s Bench Division in 2013 and was nominated a judge of the Commercial and Admiralty Courts in 2014. Mr Justice Phillips is also a nominated Judge of the Financial List and has been the Director of Civil Training at the Judicial College since 2014.

Mr Justice Phillips is a supporter of the National Theatre and during his time at  Gray’s Inn he ran the football team for 12 years, during which time the team won the London Legal League six times. 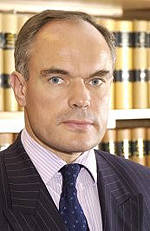 Mr Justice Dingemans lived in Singapore, Plymouth, Sussex, Scotland and Gibraltar (as a Naval child). He attended schools around the country, his first school was a state primary school in Plymouth and his last school was Radley College. Following university he trained as a barrister and is the first in his family to go into the law.

He was called to the Bar in 1987 and made a Queen’s Counsel in 2002. Prominent moments in his legal career included appearing in constitutional cases from around the Commonwealth, including acting in pro bono death row cases in the Privy Council for persons appealing against their sentence of death, such as Bernard v The State [2007] UKPC; [2007] 2 Cr App R. 22, and against the constitutionality of the mandatory sentence of death, such as Miguel v Trinidad and Tobago [2011] UKPC 14; [2012] 1 AC 361. He was leading counsel to the Hutton Inquiry in 2003 and acted for the Express and Star newspapers in the Leveson Inquiry.

Mr Justice Dingemans played Rugby Union for a number of years and has been selected as a judicial and appeal officer by World Rugby for the Rugby World Cup in Japan. 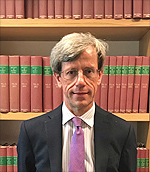 Mr Justice Arnold was born in Chelmsford and spent his childhood in North London. Educated at Highgate School he then read Chemistry before training as a barrister, specialising in intellectual property law and allied fields, particularly entertainment and media law and ICT law.

Called to the Bar in 1985 Mr Justice Arnold was appointed to the High Court, Chancery Division in October 2008 and was appointed to be Judge in Charge of the Patents Court in April 2013. In March 2016 he was appointed as an External Member of the Enlarged Board of Appeal of the European Patent Office.

As a judge he has continued to specialise in intellectual property and in 2017 was made an honorary Doctor of Laws by the University of Westminster. Outside his judicial role Mr Justice Arnold enjoys cooking, walking in Suffolk and watching cricket. He has contributed to a number of publications, including as the author of Performers’ Rights (5th ed, Sweet & Maxwell, 2015), the editor of the Halsbury’s Laws of England title Trade Marks and Trade Names (5th ed, Butterworths, 2014) and acted as editor of Entertainment and Media Law Reports from 1993 to 2004 inclusive.