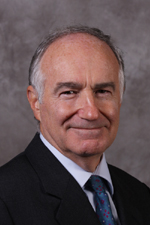 Sir William Blair graduated from Oxford University, and practised at the English Bar where he specialised in the law of banking and finance, appearing and advising in many domestic and international disputes and matters.

He became a Queen’s Counsel in 1994, and was Chairman of the Commercial Bar Association between 2003 and 2005.

He was appointed a High Court Judge in England and Wales in 2008, and is one of the nominated judges who sit in the Commercial Court.

He served as Chairman of the Qatar Financial Centre Regulatory Tribunal until March 2011.

He became President of the Board of Appeal of European Supervisory Authorities in 2012.

He served as a member of the Board of Trustees of the British Institute of International and Comparative Law until 2015, and is a member of London’s Financial Markets Law Committee.

He chairs the Monetary Law Committee of the International Law Association (MOCOMILA), which brings together leading people in the financial law field.

He is a Visiting Professor at the London School of Economics.

He chairs the Law and Ethics in Finance Project, an informal group concerned with standards in the financial sector.

He is Judge in Charge of the Commercial Court.