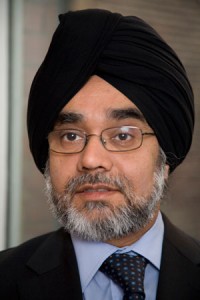 Sir Rabinder Singh studied law at Trinity College, Cambridge, graduating in 1985. He then studied at the University of California at Berkeley, graduating with a Masters in Law in 1986. He was a lecturer in law at the University of Nottingham from 1986 to 1988. He was called to the Bar in 1989 and became a QC in 2002. His practice was mainly in the areas of public law, human rights and employment law. He was one of the Junior Counsel to the Crown, serving on the A Panel from 2000 to 2002. He was also the Additional Junior Counsel to the Inland Revenue from 1997 to 2002. He was Chair of the Administrative Law Bar Association from 2006 to 2008.

He was a Deputy High Court Judge from 2003 and a Recorder of the Crown Court from 2004. He was appointed as a High Court Judge in 2011 and is currently one of the Presiding Judges of the South Eastern Circuit (since January 2013).   He has held visiting posts at Queen Mary London and the London School of Economics. He is currently an honorary professor at the University of Nottingham.