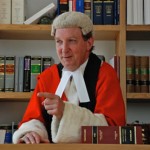 Sir Jeremy Stuart-Smith was called to the Bar by Gray’s Inn in 1978 following graduation from Corpus Christi College, Cambridge. He was appointed Queen’s Counsel in 1997. After a career at the bar which was dominated by issues generated by tort and insurance contracts, his main areas of legal interest remain technical disputes, contractual interpretation, the existence and scope of duties of care, and the development of common law remedies.

He became an assistant Recorder in 1995 and a full recorder in 1997. He was appointed a Deputy High Court Judge from 2010 and was appointed to the High Court (Queen’s Bench Division) in 2012. He became a Presiding Judge of the South Eastern Circuit in 2014. He is the co-author, with Professor Robert Merkin, of The Law of Motor Insurance.