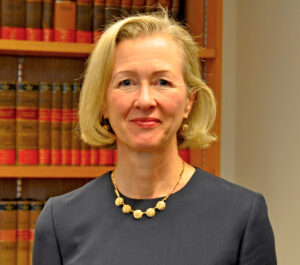 She is authorised to sit in cases in the Financial List, the Competition Appeal Tribunal and the Technology and Construction Court as well as in the Administrative Court and other Queen’s Bench work, including crime.

Mrs Justice Cockerill was educated at her local state primary school and then Lady Eleanor Holles School (on the Assisted Places Scheme) before reading Jurisprudence at Oxford. She was called to the Bar by Lincoln’s Inn in 1990, and joined Essex Court Chambers (then Four Essex Court) in 1991. She practised as a barrister from those chambers until 2017, specialising in commercial cases and in compelled evidence.

She was appointed a QC in 2011. She was appointed as a Deputy High Court Judge in 2015, sitting in the Queen’s Bench Division (specifically in the Administrative Court and the Commercial Court). She became a High Court Judge in 2017, assigned to the Queen’s Bench Division. She become Judge in Charge of the Commercial Court in August 2020.

She is the author of “Compelled Evidence in Civil Proceedings” (2012 OUP), Eleanor of Castile – The Shadow Queen (2014 Amberley) and Eleanor of Aquitaine – Queen of France and England, Mother of Empires (2019 Amberley).