His Honour Judge John Potter shares his experience of re-starting jury trials at The Lowry Theatre in Manchester which has been transformed into a Nightingale Court.

Nightingale Courts are temporary courts that have been set up in venues across England and Wales, as part of the government’s strategy to address the backlog of cases which has increased due to the Coronavirus pandemic. At the end of September, The Lowry Theatre in Salford, where His Honour Judge Potter has been presiding, began hearing cases. HHJ Potter explains:

View of a courtroom from the judges’ perspective.

“As the Resident Judge at Manchester (Minshull Street) Crown Court I had some responsibility for re-starting jury trials during the current pandemic in May 2020 – Minshull Street being one of the first four Crown Courts in England and Wales that could undertake this. We restarted trials on the 18 May 2020.

The Lowry Theatre building houses three Crown Court courtrooms and one courtroom for Civil work which deals with County Court or Tribunals cases.

Prior to opening the Court, I drew up a listing protocol which outlined listing priorities for cases to be considered suitable.

The full range of special measures are available for vulnerable witnesses, so any trial in which such a witness is to give evidence would be considered a priority. By the end of third week we have completed ten trials – some of which pleaded guilty on the first day – despite earlier trial readiness hearings.

We opened the three Crown Court courtrooms in a staggered fashion. This meant we could learn from unforeseen mistakes we initially made, which has allowed us not to lose any trials due to a lack of preparedness. Arrival of our three jury panels to separate parts of the building particularly benefited from this approach.

A challenging but positive experience 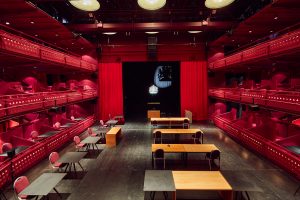 A view of a courtroom excluding the dock, with the Royal Coat of Arms visible.

I did have two major initial concerns. I was primarily concerned as to how safe the building would be for all court users during the current crisis. I also had worries that those in the building (court users and Lowry staff) would fail to treat the environment they were in as a Court and instead use the novelty of the building being a theatre as a distraction.

I dealt with this by hosting two open meetings for everyone who works in the building and professional court users such as the Crown Prosecution Service.

At these meetings I emphasised the work that both parties had undertaken to make the building available and safe for use and the importance of vigilance being maintained throughout.

I presided over the first effective trial and due to the safety measures, that I ensured were in place, I am pleased to say we have received very positive feedback from all court users throughout.

I have found the experience challenging, but overall positive. Judicial office holders  have worked together to provide an increase in the amount of jury trials being conducted in Greater Manchester – a benefit to all. We will continue to learn as cases progress in what will always be an unusual environment.

We would not have been able to achieve the little we have so far without the impressive and supportive commitment of those working within the Court Service and The Lowry Theatre itself.

I am very grateful to all of them.”

Images by Nathan Chandler at The Lowry Theatre via Flickr (external site, opens in a new tab)