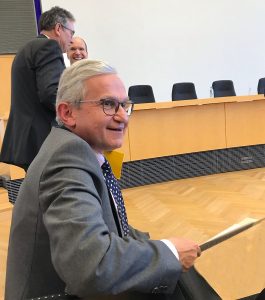 On a two-day visit to Germany, the Chancellor of the High Court, Sir Geoffrey Vos, met with judges, lawyers and officials in Bavaria and Berlin to discuss Lawtech and the work of Business and Property Courts.

He spoke at the Palace of Justice in Munich on the position of English law and UK jurisdiction after Brexit to an audience of 120 judges, lawyers and business people, all members of the British Chamber of Commerce in Germany and the Munich Juridical Society.

His speech – entitled The Future for the UK’s jurisdiction and English law after Brexit – is attached below.

The second speech, given at the Federal Ministry of Justice and Consumer Protection in Berlin to a group of 100 lawyers and officials, considered an area of common interest to both jurisdictions – LawTech. 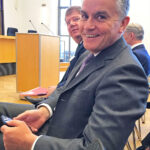 The Chancellor dealt with the need for both countries to rapidly embrace the use of technology and the provision of a clear legal framework for the use of cryptoassets and smart contracts.

This speech – entitled LawTech, Smart Contracts and Artificial Intelligence – is also attached below.

The theme of both talks was the areas of interest shared by the German and UK jurisdictions, and the benefits of maintaining close relations after the UK leaves the EU.  Both were followed by lively Q&A sessions – all in English. 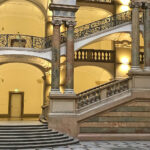 Palace of Justice in Munich

In Munich, where the Chancellor was joined by Mr Justice Picken, a Commercial Court judge, discussion focussed on the challenges of working together in particular areas of interest to the business community, such as intellectual property, financial services and consumer protection, and product liability.

And in Berlin, the discussion ranged around the use of artificial intelligence in the courts, and the importance of an incremental approach to its deployment.

The Chancellor said of last week’s visit: “I was keen to get the message across that dispute resolution in the UK is forward-looking, technologically enabled, and staffed by judges of quality and integrity, and that engagement between judges in Germany and the UK is important now and will remain of huge value.”