The Chief Justice of Iraq, Faiq Zidan, and other Iraqi dignitaries officially visited the Royal Courts of Justice (RCJ) library recently as part of a wider visit to strengthen ties between the UK and Iraq.

The event was organised by library staff and the International Law Book Facility (ILBF), which collects books donated by legal teams in the UK and sends them to organisations all around the world.

In November 2019, the Iraqi Judicial Institute was one of the organisations to receive books from the ILBF. Their shipment of 400 books was donated by the London School of Economics and HM Treasury, and packed with the help of RCJ volunteers. 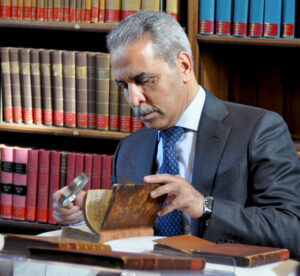 When asked about that donation to them, Chief Justice Zidan said:

‘’Thank you for the books, they were very useful to us and useful for our judicial institution, particularly for our university students conducting research. The books on trading law, commercial investment law, and citizenship conflict laws were very useful.’’

For the visit, the library team organised a view of their historical books and rare items, and showcased their current research collection. There was also a viewing of the ILBF books currently stored at the library. This prompted a discussion regarding the historical connection between the old books at the RCJ and companies like LexisNexis, dating back to important legal publishers like Richard Tottel and Henry Butterworth.

Chief Justice Zidan talked about the desire of the Iraqi Judicial Institute to improve the accessibility of their older books and law reports through digital archiving and discussed potential future work with LexisNexis. He is also looking forward to building a valuable museum of documents and books in Basra, Iraq.

Chief Justice Zidan added: “We have had a good time visiting the library. We are in a place where we feel the most comfortable and being here reminds us of when we were students of the law. Books are our tools of work. We are very happy to be visiting here.’’

The discussion ended with promises of direct communication between both judicial libraries, and an exchange of knowledge and information to help share best practice.

Katrina Crossley, CEO at ILBF, and Ellen Lake, an ILBF operating committee member and a senior Associate at Clifford Chance law firm, were both present during the visit, alongside library staff including Stephanie Curran, Nicholas Stock, Sam Bryan, and Philip Rowbottom.

The donation and receipt of the books in Iraq in 2019 was featured in this article (external link, opens in a new tab).