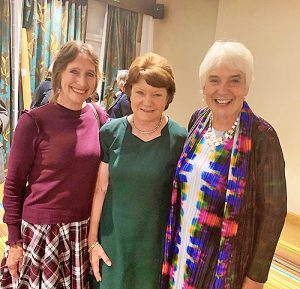 Dame Janet Smith and Dame Caroline Swift can be heard in a First 100 Years podcast talking about their life on the Northern Circuit, their friendship and their distinguished judicial careers.

Described as ‘the dream team’, they first met in their early careers in Manchester, going on to work together over the years, including on the high-profile Shipman Inquiry.

Earlier this month (September), Byrom Street Chambers, from where they both practiced when in silk, brought them back together for an event in Manchester, where they were interviewed on stage by journalist, broadcaster and literary critic, Alex Clark.

The event – which was recorded for the First 100 Years project, marking the centenary of women entering the judiciary after the Sex Disqualification (Removal) Act 1919 – can be heard online (external link, opens in a new tab). 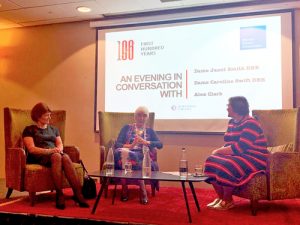 The pair covered many topics, including their proudest moments, making the leap from being barristers to members of the judiciary and the merits and demerits of early specialisation in practice.

Dame Janet told how, aged 16, she thought about becoming a barrister. “But that was knocked on the head by a careers advisor, who said ‘The law is a man’s world’. That was shocking,” she told the audience.

She started going to Bolton Sessions (as it then was), admiring the Recorder of Bolton for his ability to mix compassion with the right level of toughness. She was 28 when she finally started her legal career, and thanks her mentors for their help and support.

Dame Caroline said of discrimination: “It’s never been an issue. It never occurred to me that I was the only woman in the chambers. The attitude towards women on the Northern Circuit was better than places like London. Women in the North had paved their way before us.” 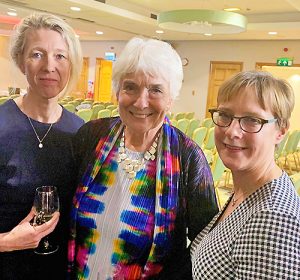 In 1991 they worked together on the Scotforth public inquiry, looking into the treatment of autistic children at a school in Lancashire.

Then, in 2001, Dame Caroline was appointed Leading Counsel to the Shipman Inquiry, which was chaired by Dame Janet. This investigated the activities of GP and serial killer, Harold Shipman (external link, opens in a new tab). In a fascinating insight, they discussed the point at which they had felt they obtained the trust of the families in the integrity of the Inquiry.

The audience also heard how, in February 2016, Dame Janet’s report into Jimmy Savile and the BBC was published, looking at his history of sexual offences, dating between 1959 and 2006, most of them committed in the 1970s.

At the end of the interview, they took questions from the audience, such as what advice they’d give their younger selves and what they would advise people going into the law today. 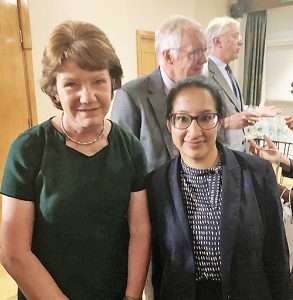 The event concept was devised and organized by Mary Ruck of Byrom Street Chambers in support of the First 100 Years project. It was attended by members of the Northern Circuit, the Bench and Solicitors’ profession, enabling many old friends of the pair to attend, as well as many young practitioners.

There was great laughter when an audience member said a colleague had once told her to ‘instruct the dream team – that’s both of you two!’