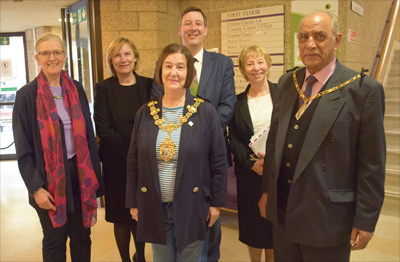 Croydon Law Courts have been inundated with requests from schools wanting to arrange a visit, following the success of their latest open day.

More than 1,500 visitors of all ages had enjoyed demonstrations by police sniffer dogs, mock trials and sentencing, talks by the judiciary and 34 stalls manned by various agencies and charities.

Helping 100 volunteers who manned the stalls and gave presentations in the courtrooms were 15 police cadets and more than 30 staff from the crown and county courts who together made sure the day ran smoothly.

The number one attraction was the sniffer dogs, followed by tours of the cells, which had more than 400 people through their doors.

Also extremely popular were two mock trials, in which students in Year 12 from four different secondary schools got to present the cases for the prosecution and defence in a hypothetical scenario involving a street robbery of a mobile phone.

Visitors also enjoyed a Family, Drug and Alcohol Court mock hearing, a Children’s Court, seeing a police car, and talks on being a judge and the work of a magistrate and the probation service. The canteen – which offered half-price meals, snacks and drinks to staff and volunteers – had around 300 visitors.

Comments left by the visitors included: ‘an amazing idea’, ‘do this every year’, ‘there was a lot to do’, ‘really informative and child-friendly’, ‘a real eye-opener’, ‘a great opportunity to ask judges questions’ and ‘thank you so much for organising this day, it is commendable’.

Most people had heard of the event through local word of mouth, followed by via their local school, Facebook, and on posters and flyers.

HHJ Alice Robinson, Honorary Recorder of Croydon and Resident Judge, said: “So successful was this initiative that the Crown Court has subsequently received many requests by schools for visits to the court.

“Since the open day, 90 students from five schools have already visited. Two more schools are due to visit next month (September) and the court is continuing to receive enquiries, including from jurors who happen to be teachers.

“At these visits, which have been enthusiastically received, the students have an opportunity to speak to staff, advocates and Judges about court procedure, legal careers and the work of a judge, as well as watch real cases in action.

“The open day has paved the way for important new links between the court and local community and for many school students to gain a greater understanding of the criminal justice system.”