Jingi is a magistrate based in South London, who primarily sits on criminal cases. Her parents were born in Nigeria and came to the UK in the early 1960s – her mother was a caterer and her father a lecturer of science. She is the youngest of five children and grew up in South East London, in a very tight-knit community. Jingi has always been interested and involved with the issues in her community and speaks to us about her journey into magistracy. 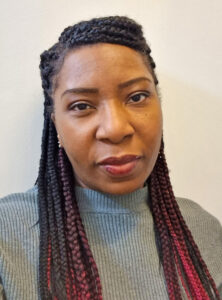 What made you decide to become a magistrate?

I have always had an innate sense of fairness, even from a very young age. I studied Law at University and found it extremely interesting. When I completed the degree, I contemplated taking it further and possibly becoming a lawyer. However, after working as an outdoor clerk for a while, I decided against it for various reasons. I then joined the MoJ and slowly began to toy with the idea of being more involved in the legal system. I was already a member of a Tenants’ & Residents’ Association (Vice-Chair), a Parent Governor and a Trustee at my daughter’s then nursery. Therefore, as someone heavily involved with the community, I was privy to many issues affecting young children within the community (a fair number of whom I knew), and what could result from it. I wanted to be a positive member of my community. I did some research and spoke with my line manager and decided that I would apply to become a magistrate.

Typically, you will sit as a bench of three – two Wingers and a Chair (he or she will address the court, but everyone has an equal voice). You also have the assistance of a legally qualified adviser and the Sentencing Guidelines (opens in a new tab). You won’t know exactly what awaits you until you appear at the court in the morning and are given your list. It could be a ‘trials’ court, which is typically two/three trials for the day as they can be quite lengthy. Alternatively, it could be a GAP (‘Guilty Anticipated Plea’) court where you will have a list of anything up to 14/15 different cases. The offences may include (but are not limited to) drink/drug driving, criminal damage, assault, theft or warrants. Even if there are several cases which come under the same offence, there is always something new to be learned as the circumstances are usually different and when all factors are considered, the sentence may also be different.

What advice would you give to someone considering becoming a magistrate?

Check and see if your local area is recruiting (external link, opens in a new tab) – there is a shortage of magistrates, but not all areas recruit at the same time. Visit your local Magistrates’ Courts (external link, opens in a new tab) at least three times and take notes. If possible, check courts in different areas too so that you get to see a variety of cases. Talk to your manager or HR department and establish whether they are willing to support your application and release you from work for at least 13 days of the year.