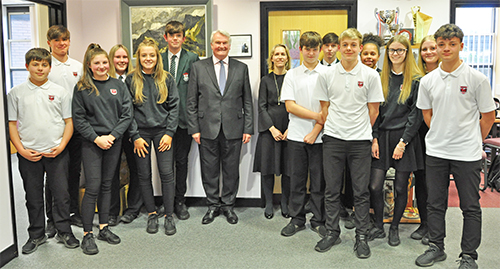 The Lord Chief Justice with pupils on a school visit to Mold, North Wales

As part of his priority of educating pupils about judges, the justice system and rule of law, the Lord Chief Justice has visited a school in North Wales.

Lord Burnett of Maldon visited Alun School in Mold, speaking to its pupils and also those from nearby Ysgol Maes Garmon School, as part of the schools’ engagement programme that judges are involved in across the England and Wales.

He was accompanied by local diversity and community relations judge, District Judge Bethan Japheth, who is part of the Wales Circuit, based at Wrexham County & Family Court. 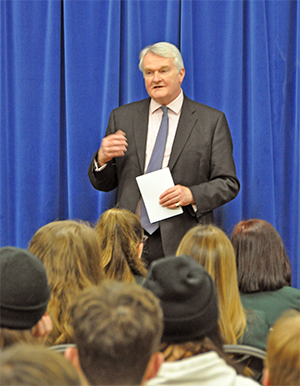 Lord Burnett told the pupils: “The rule of law is fundamental to our British way of life. Every day, many thousands of judges make decisions which affect people’s lives, and their livelihoods. But most people have little idea of what goes on unless they find themselves in the system.

“I want to make it easier for schools to help teach pupils about the justice system, and how it really works – I want to invite students to talk to us about our work. We already know that having a discussion with a real judge is very popular with school students. I want to make this opportunity more widely available to schools by asking them to consider inviting judges to visit and give them access to other resources that support their curriculum, and their careers conversations with students.

“There are judges from all walks of life and at many various levels in courts and tribunals. I also want to send the message to all students, from whatever background, they could be the lawyers and judges of the future.”

The schools’ engagement programme is backed up by online resources that are available to schools and students on the judicial website (opens in a new tab). These include notes for lessons, fact sheets and other resources to help schools facilitate learning about the justice system and rule of law.

The visit comes on the back of the work that scores of Diversity and Community Relations Judges (opens in a new tab) and magistrates already do in the community. The Lord Chief Justice hopes their work – often unseen and unsung – will help encourage students from all backgrounds to think about a career in the justice system.

It also follows the launch of an online course about the work of judges, aimed at young people. Developed in partnership with King’s College London the course is open to anyone who is interested in learning more about the work of modern judges. It is available now on the FutureLearn platform (external link, opens in a new tab).