In an update to his reflections on how Swansea Crown Court adapted to COVID-19, His Honour Judge Geraint Walters shares his experience of presiding over jury trials at the new Nightingale court in Swansea. HHJ Walters explains: 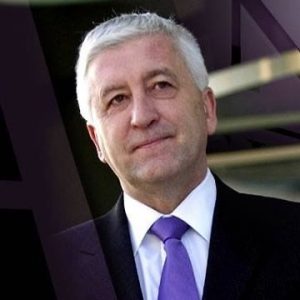 “Planned with military precision the Civic Centre Court opened on Monday the 17 August 2020. There were two trials listed. Despite rigorous pre-trial management of the first listed trial, the defendant decided to plead on the day.

This did not pose a problem since there was a backing trial which was trial ready and which proceeded with a jury being sworn at 11 am.

The jurors had all managed without exception to arrive in the correct building. After the usual induction they were all given a copy of the “Jury Questionnaire” prepared before- hand by counsel setting out the names of witnesses and so on. They were then balloted in open court in their absence and once the 12 had been selected they were brought into court and put in charge in the conventional way.

Two of the prosecution witnesses who were in their 80’s and resided 60 miles away gave evidence from their homes via Cloud Video Platform.

The following week we had found enough space to socially distance a second jury panel and therefore there will no longer be a need to wait for a verdict before commencing another trial. That could lead to a further trial being capable of being heard each week. In the second week we dealt with five trials; two pleaded and the other three reached a verdict by the jury. 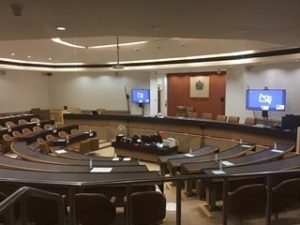 A view of the courtroom

The transformation of the one-time Council Chamber and the other rooms allocated to us was truly remarkable. HMCTS staff at all levels and the officers and staff of the City Council, together with skilled contractors worked tirelessly for a fortnight to enable the deadline for opening to be met.

Our staff installed the distancing signage and general signage indicating where everything was. Panic attack systems were placed in court and furthermore mobile panic attack equipment was made available to staff.

Security was a priority. By Monday we had six new security staff and several new ushers. Trained by our most experienced existing staff they took to their duties like ducks to water. 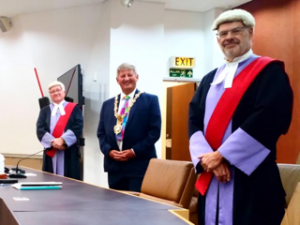 On Thursday 20 August 2020 as a mark of the close collaboration between the Court Service and the City Council we were pleased to be able to show the current Lord Mayor of Swansea what had been achieved by the efforts of all involved.

We’ve received positive feedback from professional court users and members of the public, including:

“The fact it was one of the first Crown Courts in the UK to recommence trials is an example of its excellent planning and management. The opening of its Nightingale Court is testament to that skill.” The Law Society in Wales

“I do not possess the words of gratitude to convey all that I must, nor do I know of any action within reach of my grasp that would adequately or appropriately show how wholeheartedly thankful I am for the genuine kindness and care bestowed upon me by all involved during my time spent at the Nightingale Crown Court service at the Civic centre Swansea.” Anonymous court user

The Judges in Swansea recognise that so many members of HMCTS and City Council staff went the ‘extra mile’ to make all this possible so quickly. On 1 September 2020 we expect to be able to run two trial courts in the main court house bringing our trial court capacity to three.”