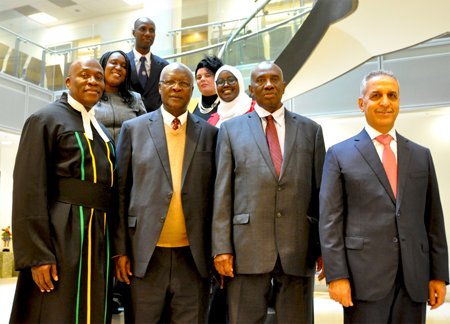 Judges from Africa, Central America, the Caribbean and the Middle East

Judges from Africa, Central America, the Caribbean and the Middle East were special guests at the event marking the Opening of the Legal Year for England and Wales.

On Tuesday (1 October), the international delegation joined hundreds of the most senior judiciary of England and Wales to enjoy the service in Westminster Abbey, followed by the Lord Chancellor’s breakfast in the Great Hall in the Houses of Parliament.

They later toured the Rolls Building, the largest specialised centre for the resolution of financial, business and property litigation in the world, and met Mr Justice Knowles, Sir William Blair, Her Honour Judge Rachel Karp and Tribunal Judge Judith Gleeson. 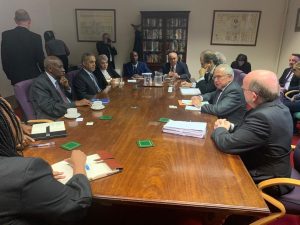 Judges visited the Royal Courts of Justice and met Lord Justice Gross, other judges and representatives

On Wednesday (2 October), they toured the Royal Courts of Justice and met Lord Justice Gross, other judges and representatives from a variety of external interested parties who work closely with the Judiciary on international engagement. These included the Commonwealth Magistrates and Judges Association, the International Law Book Facility, ROLE UK, African Prisons Project and the Slynn Foundation.

Each visiting judge met with the Lord Chief Justice; thereafter, a reception and dinner was held at the Foreign and Commonwealth Office (FCO).

CJ Jallow last visited London in late 2017, soon after his appointment following the end of the 22-year Jammeh regime. As a result of that visit, a strategic course of engagement has ensued, regarded as of the highest importance to the Gambian judiciary, attracting praise from the High Commissioner on various public platforms.

Mr Justice Sykes had been invited by the Supreme Court as one of the jurisdictions that sends cases to the Judicial Committee of the Privy Council. He was appointed as the Chief Justice of Jamaica on February 1, 2018 and was sworn in on March 1.

Chief Justice Maraga was last in London in May this year for what was regarded as a highly successful FCO supported visit. Following this visit a plan for future engagement has been established in partnership with the FCO to include a visit from their Judicial Training Institute.

Justice Salas is a Justice of the Supreme Court of Mexico. He was attending the Opening of the Legal Year for the second year running. Lord Hughes and Mrs Justice McGowan attended Mexico earlier this year.

Speaking during the visit, Lord Justice Gross, lead judge for International Relations, said: “It is a real pleasure and an honour to host such esteemed guests. The Opening of the Legal Year matters to us a great deal and we are delighted to have them here to share this tradition.”