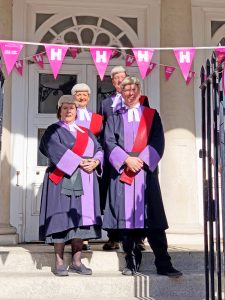 More than 900 visitors gained a new perspective into the justice system when Lewes Crown Court opened its doors to the public as part of the town’s heritage open days.

Throughout the day, a series of mock trials were staged to help people better understand how the justice system works. Members of the public had the opportunity to act as the jury weighing up the case for the prosecution and the defence before casting their verdict.

Another highlight of the day was the chance to tour the building allowing visitors to compare the newer courts to the older, more historic, ones and to explore the cells. People, of all ages, also had the chance to don a wig and dress up as a judge or barrister.

Judges were on hand throughout the day to answer people’s questions, along with court staff, barristers, probation officers, the police and other agencies and charities, who worked together to make sure the day was a success.

Resident Judge, Christine Laing QC, said: “All the court staff worked so hard to put together an amazing day for all our visitors, and the feedback was overwhelmingly enthusiastic. The mock trials worked really well, and I am so grateful to all the barristers and ‘witnesses’ for their efforts, and to the judges for answering so many interesting questions about the challenge of running a modern justice system in our beautiful but very historic court.”