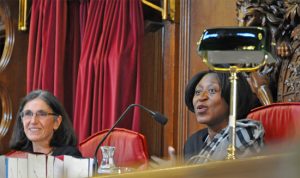 Following the schools initiative launched by the Lord Chief Justice, a lot has been happening to encourage more children to visit the courts in England and Wales.

Work has also been taking place to get more judges into schools to explain the justice system and bust some of the myths around their role.

The Judicial Office’s diversity team organised a School’s Question Time event in collaboration with the National Justice Museum, which has a base in the Royal Courts of Justice, and Young Citizens which is the largest charity involved in public legal education in the UK. 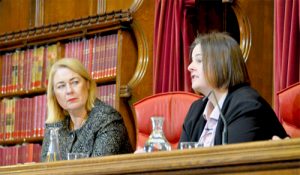 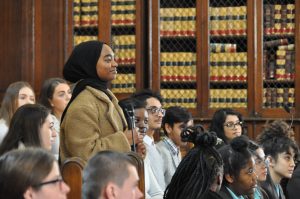 Pupils asking questions at the event

The event – the second of its kind – was held in Court 4 of the Royal Courts of Justice. Lady Justice Ingrid Simler chaired the panel. She was joined by HHJ Sarah Venn, HHJ Barbara Mensah and Upper Tribunal Judge Paula Gray.

Pupils from 12 local schools attended and put forward a range of questions, from asking about a typical day as a judge to the best career paths within the law.

When the children were interviewed afterwards, it was clear they’d enjoyed the learning experience and gained a better understanding of what it is to be a judge.

Please visit the Judicial Office’s YouTube page to watch an hour-long version of the event (external link, opens in a new tab).

Lady Justice Simler told the audience: “Do what you love and don’t let anyone put you off. If you have the ability, determination and drive, I hope we will see you in ten years’ time sitting there as Counsel or Solicitors in a case and eventually on this side of the bench.” 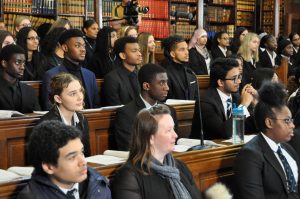 The overall message from the judges was that, if you have the talent and qualities needed and determination to succeed, then irrespective of your background, a judicial career is open to you, alongside a wide range of other careers in the law and the justice system.

Given the success of these events, it is something the Judicial Office hopes to replicate in different regions across England and Wales in the future.