Sir Brian Leveson, one of the most senior criminal judges in England and Wales, was hailed by colleagues as a ‘legal giant’ at his valedictory event.

Best-known by the public for chairing the inquiry into the culture, practices and ethics of the Press, Sir Brian retired from his judicial role as President of the Queen’s Bench Division and Head of Criminal Justice on his 70th birthday on Saturday. 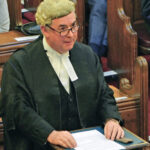 The day before, his valedictory event was held in a packed courtroom at the Royal Courts of Justice in London.

In his speech, Sir Brian praised his fellow judges and support staff for all their help over the years, adding: “Many have worked far above and beyond the call of duty to help achieve what has been achieved. My successor (Lady Justice Victoria Sharp), who has supported me so unstintingly, will have a great team.

“I will look on with great interest to see what the future has in store. I wish you well – the future is in your hands.”

Tributes were paid to Sir Brian in speeches by the Lord Chief Justice, Lord Burnett of Maldon; Attorney General Geoffrey Cox QC MP; Chair of the Bar Richard Atkins QC; and the president-elect of the Law Society Simon Davis.

Addressing the court, Richard Atkins said in his speech: “Sir Brian was a giant at the Bar and has been a giant on the Bench. 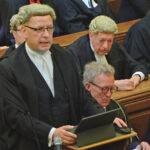 “He will be a very hard act to follow, although I suspect that Lady Justice Sharp will bring her own inimitable style to the job.”

Speech by Richard Atkins QC, Chair of the Bar (opens in a new tab)