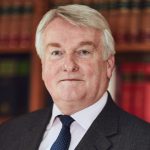 Newcastle has been a centre of justice for many centuries. In 1991 a new combined court was opened on the banks of the River Tyne in which sat the Crown Court and some civil courts. But, in addition, courts in all jurisdictions and tribunals operated from a range of buildings of varying quality and suitability across the City. In some, the leases were due to expire whilst others were in poor condition.

It was in those circumstances that, in 2014, work began to identify a suitable site to bring together the civil and family courts and the tribunals in one building. The Civic Centre was identified in 2015 as an ideal site. Close cooperation between HMCTS and the City Council followed and a lease was signed in September 2018. Building works commenced later in the same year.

All those with an interest to ensure that first-rate facilities were made available for these jurisdictions worked together collaboratively. In November 2019, the building was handed over to HMCTS for final fitting out. It was on time and on budget, itself a tribute to the professionals who designed, oversaw and executed the building works.

Courts began sitting in the new Civil and Family Courts and Tribunals Centre in January 2020 and, by the end of March 2020, it was fully operational.

The development of this site liberated space in the Combined Court Centre which itself has been subject to works since, to enable the Magistrates’ Courts to sit there.

You may wonder why we have gathered today, 16 months later, formally to open this building. The answer lies in COVID. The centre became fully operational at almost precisely the same time as the country went into lockdown at the end of March last year. Several dates were arranged for its opening but each proved impracticable. Even today, we meet remotely. I had planned to be in Newcastle with many of those now joining us remotely but that has not proved possible.

The 25 courts and hearing rooms in this centre are all equipped to enable the remote attendance of participants in legal proceedings. That has proved invaluable during the COVID emergency and will play a critical part in the future dispatch of business in all jurisdictions whilst at the same time enhancing access to justice.

The successful conception, planning and delivery of this project would not have been possible without the inspirational leadership and hard work of so many who were involved.  The close working relationship between all concerned is a model for projects elsewhere.  I extend my deep gratitude to everyone who has made it a success.

Newcastle has a Civil and Family Courts and Tribunals centre of which it can be proud and which will serve it well for many years to come. Thank you.