The history of bankruptcy law in England and Wales and of the courts administering it is as long as it is complex.

The origins of English bankruptcy law are commonly traced to the Act Against Such Persons As Do Make Bankrupts of 1542 which was aimed at persons “who craftily obtaining into their hands great substance of other men[’]s goods do suddenly flee to parts unknown, or keep their houses, not minding to pay or return to any their own creditors, their debts and duties”. The Act allowed proceedings to be brought by complaint made to any three of the Lord Chancellor, the Lord President, the Lord Privy Seal, a member of the Privy Council and the two chief justices. If the bankrupt failed to answer a summons for three months he could be declared “out of the King’s protection, and his assets could be sold for the benefit of his creditors The Lord Chancellor and the other office-holders mentioned constituted “[a] quorum of…high officials [who] were empowered to dispose of all the debtor’s property and to pay all the debts in full, or, at least, rateably, the property to be distributed among the creditors.” 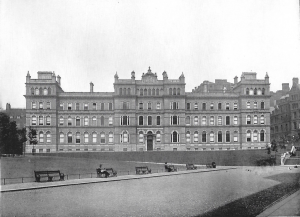 Whilst the Court of Chancery retained jurisdiction over bankruptcy matters, the administration of bankruptcy was generally entrusted to commissioners who sat as committees of three, five or seven and who were responsible for making many of the decisions that would now be regarded as judicial. Unfortunately, commissionership was often conferred as political patronage, and as a result, although some commissioners were conscientious and well informed, most were not suitably qualified for the work they were called on to do. By 1801 the system had fallen into disrepute. Lord Eldon is recorded in 1801 as expressing “strong indignation at the frauds committed under cover of the bankruptcy laws”.

Bankruptcy proceedings in London were generally conducted in Lincoln’s Inn and later in The Guildhall. However, the volume of work and the need for reform warranted the creation in 1832 of a permanent bankruptcy court, called the Court of Review, which removed jurisdiction from the Lord Chancellor. This was abolished in 1847 and the jurisdiction of the Court of Chancery was restored. The London Bankruptcy Court then took over, ultimately operating in a building in Basinghall Street. That building was replaced in the late nineteenth century by the New Bankruptcy Courts, located near the Royal Courts of Justice and Lincoln’s Inn. By that time, bankruptcy proceedings had been integrated into the High Court, much of the work being done by Registrars in Bankruptcy (whose role was largely administrative when created in 1821 but which gradually developed into a judicial office, in particular after the almost total abolition of the commissioners in 1831) but a significant amount still by the judges of the Chancery Division.

Although the term Companies Court is widely used and well understood, it is not truly a court at all:

Although the origins of the term are obscure, it seems likely that it came into use in the nineteenth century, reflecting the rise of limited liability companies and the consequential need for a winding up procedure. In 1892 Mr Registrar Emden was appointed as the first registrar in companies winding up, thus beginning the company law aspect of the registrars’ jurisdiction.